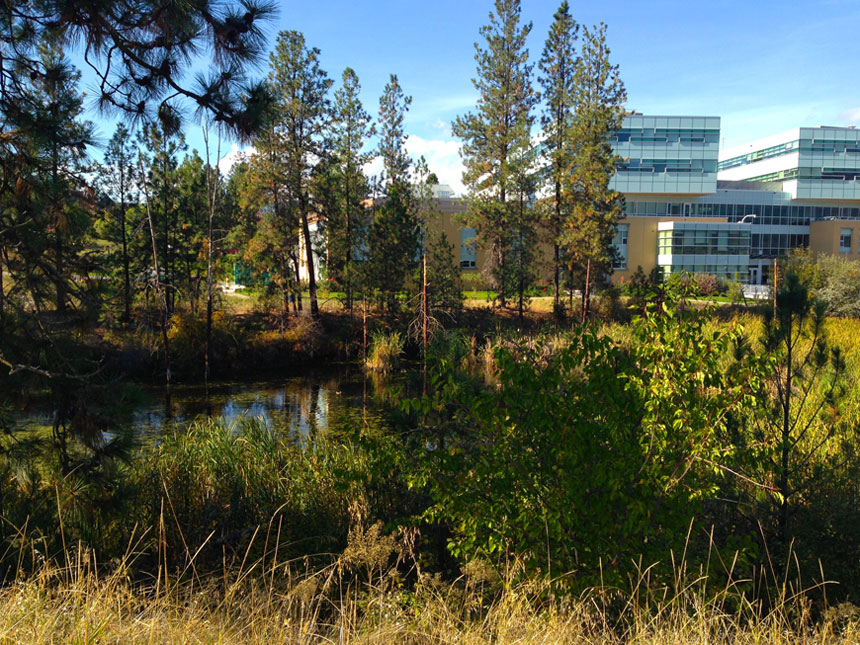 The UBC Okanagan Campus is situated along the McKinley Escarpment, where north-south-aligned ridges and valleys formed during the last glaciation of the Okanagan Valley. Positioned along the ridgeline, the campus is afforded panoramic views to the east—to the valley floor and rolling hills beyond, and to the west—to surrounding agricultural lands and Robert and Little Robert lakes.

With slopes ranging up to 30%, the campus’s topography is a significant factor in its evolution—in the placement and orientation of its buildings, roads, and open spaces. Several low-lying areas have developed into stormwater retention areas and wetlands and are valued as natural and ecological features on campus.

The campus sits within the ecological setting of the Okanagan Very Dry Hot Ponderosa Pine zone, which generally represents the driest woodland regions in BC, with hot, dry conditions in summer and cool conditions with little snow in winter. With a diverse landscape of pine woodland and open grassland, the campus contains several ecosystems and has plants and wildlife identified as being species at risk. Among those documented on campus are the Great Basin Spadefoot Toad and the Western Painted Turtle. Approximately 25% of the campus has high environmental sensitivity, representing primarily woodland and wetland ecological communities. 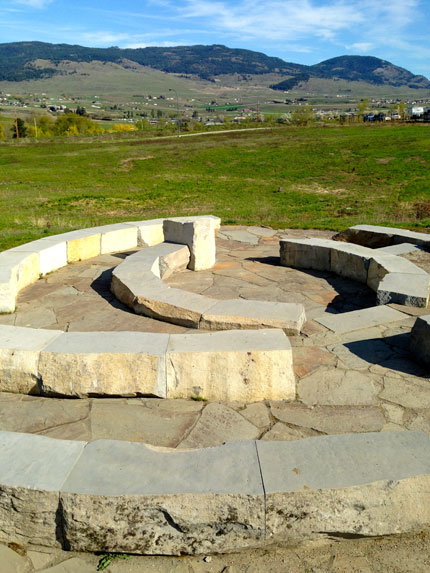 Traditional Syilx territory extends over approximately 69,000 square kilometers. The northern area of this territory is close to the area of Mica Creek, just north of Revelstoke BC, and the eastern boundary is Kootenay Lake. The southern boundary extends to the vicinity of Wilbur, Washington and the western border extends into the Nicola Valley.

Syilx place names identify most significant land features by which visitors would remember the area. The campus is nearest to the body of water known as Duck Lake, which was a highly productive fishing lake in summer and winter for ling and lake trout and a now extinct species. The Syilx word pəlmiws refers to Ellison or more commonly, Duck Lake, and identifies it as having a delta area near the middle. A Syilx village was located in the vicinity and the campus grounds, including the airfield across the highway, were a highly productive harvesting area for game of all types, including birds, as well as the abundant siyaʔ (Saskatoon berry, one of the Syilx four food chiefs) and a wild carrot called sƛ̕uq̓ʷm. Each year the profusion of wild sunflower or smukʷaxən is a reminder of the natural abundance of Syilx food in this area.

Since the beginning of the twentieth century, the major appeal of the Okanagan Valley has been cultural—for its climate, proximity to Lake Okanagan, outdoor recreational opportunities and access to a major ski resort, as well as the aesthetic appeal of the natural and agricultural landscapes of the region. The settlement of the Okanagan Valley has significantly influenced its cultural landscape. When the City of Kelowna was incorporated in 1905 an orchard land boom was underway, bringing settlement and transforming the entire Okanagan Valley. Cattle ranching and grain growing emerged as economies in the latter half of the century, followed by expanding tourist and servicing industries that have intensified and expanded the valley’s growth and urbanization.

The University of British Columbia acquired and expanded on land initially developed as the Okanagan College campus, created through the amalgamation of a number of failed development lots purchased by Okanagan University College from the City of Kelowna in the early 1990s. Okanagan College opened its new physical campus on these lands in 1993, and was subsequently renamed Okanagan University College, with the original campus consisting of a core of four brick-faced buildings for Arts, Science, Library and Administration, arranged around a central courtyard with a gymnasium, two residences, and a daycare all set into the sloping site of a former quarry.

Recognizing the need to further expand post-secondary opportunities in the province, the BC Ministry of Advanced Education announced a plan in 2004 to create a UBC campus in the Okanagan by assigning the Okanagan University College’s North Kelowna campus to UBC. In July 2005, UBC acquired the campus and, in September, classes began with 3,500 students. Following the completion of a major capital investment program in 2012, the campus has more than doubled student enrolment to 7,500 full time equivalents (FTE) and nearly tripled its building floor area, transforming into a world-class university.